RALEIGH, NC (January 19, 2016) — “My husband and I met over a floppy disk, and fell in love over a Star Trek quote,” confides Apex, NC, writer Madhavi Krevat who describes herself as both a hopeless romantic and a skeptical realist. After YourNovel.com published her book “A Ren Faire to Remember ” in 2014, she added the moniker “Author.”

Known as “Madi” to some, Madhavi Krevat has penned “New York: Some Like It Hot ” as the newest release from YourNovel.com, which created the genre of personalized romance novels 24 years ago. Set in New York City, any starring couple can undertake this adventure between the pages of this new book.

“I’m a big science fiction/fantasy geek,” says Krevat. “So, I like to put a little geekiness into each book I write. I think it spices up the romance even more. There’s a little science fiction in this one, in the form of time travel. 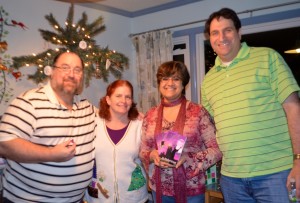 Madhavi Krevat with her first novel for YourNovel.com alongside husband Matthew. Also shown are Debbie and Mike West who appeared in a Today Show feature about starring together in a book. Debbie encouraged Madi to submit her writing to the company.

Krevat credits her husband, Matthew, as her inspiration, always pushing her to write. “He’s the only one who truly understands exactly what my writing means to me; he knows it’s my passion. He’s my biggest fan and my most ardent supporter.” She adds, “The other person I really need to thank is Debbie West. A YourNovel.com enthusiast, Debbie kept trying to get me to submit something: And now I’ve written two novels.” When Krevat’s first novel rolled off the presses in 2013, West got one of the first copies. “And she’ll probably be the first one to buy this new one, too,” Krevat laughs.

At the beginning of 2015, company co-founders and husband-wife team J.S. Fletcher and Kathy Newbern approached Krevat to ask her to write a story proposal and an outline because of her success with her first novel.

Krevat immediately jumped on it. “That’s where this book was born. It’s changed a little since its initial conception, but it’s been a fun ride.”

Says YourNovel.com’s J.S. Fletcher: “Kathy and I believe in helping people achieve their dreams, and we are delighted that Madi has chosen to pursue hers with us in this way.”

The author is living a true love story thanks to her 23-year marriage and three children. “Matthew is my true love, my best friend and my inspiration. He brings out the best in me; he always has. Without him and my three children — Jacob, Joseph and Leah — my life would be sadly incomplete. They are my biggest fans, and I am theirs.”

Krevat is still in awe of the fact that she is a published author. “I have always wanted to be published. I’ve been writing poems and stories for years; I’ve never stopped. I write every second I can.

Read an excerpt from “New York: Some Like it Hot,” here.

For Valentine’s gift giving, order Krevat’s book or any title from YourNovel.com no later than Feb. 7 (and earlier is better) at www.YourNovel.com.