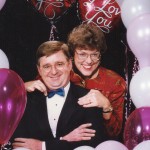 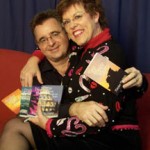 It’s a great story, how we came up with the idea for YourNovel.com, that dates back to 1992:

Newbern: “I was on a panel at a public relations conference and the ice-breaker question was: ‘What would people be surprised to find out about you?’ I answered that I had written a yet-to-be published romance novel, which got an appropriate response. Fletcher, then my boyfriend, had driven to the conference with me, and at lunch, one of the women, a friend, at the table said, ‘Wouldn’t it be great to read about yourself in one of those romance novels?’ Well, we all laughed and kidded around about it. Then, on the four-hour drive home, Fletcher and I looked at each other, and the proverbial light bulb went off. We said, ‘You know, we could do that!’ and actually started outlining our first book, ‘Another Day in Paradise,’ on the back of a manila folder on the drive. We started writing it the next day. The original day of our company was Beach House Presentations because I had read that you should ‘put out front’ what you wanted in life. With the advent of the Internet, we came up with the name YourNovel.com since we were going to let you star in your own novel.”

Fletcher: “We acted on a great idea, and today are going strong. We firmly believe that the only way to get something done is to do it.”

Newbern: “We did not want to look back at some point and say, ‘You know, if we had just done that personalized romance novel thing…’ So the lesson is: Act on a good idea.”